I’ve spend most of this last week mucking around in Expression Blend (Microsoft’s Layout tool for their new UI API WPF). 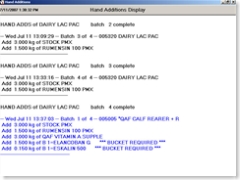 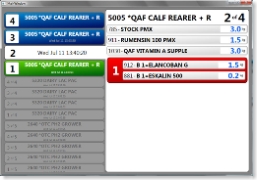 The screens above show the fruit of my labor, it’s a non-interactive screen which displays products that have to be hand tipped into the batches of product we make here at the feedmill.

The old one (to the right) was a simple rich text control which read in the contents of a text file generated by the process control system, it coloured everything from the bottom to the first “%” character in the text in blue to signify the active batch.

The new version reads in a new XML formatted text file (watched by a “FileWatcher” object)  into a typed dataset, manipulates the data a little to weed out anomalies and to regulate the timing, then generates an “ObservableCollection” of objects from the resulting dataset which gets bound to the WPF window.

So it’s a bit of a weird blend of the newest of the new and the crappiest of the old, text file integration is a bloody nightmare… you should see the hoops I have to jump through in the code to smooth out the missing bits.

After my first week of WPF I think it has a lot of potential but I don’t think the first version of the tools are quite ready for prime time.