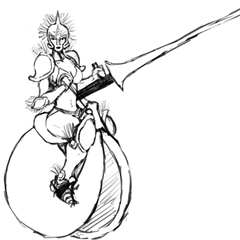 Since I implemented the physics system into the “Ride the Fury” engine I’ve been thinking of gameplay ideas that might suit it. Mostly because programming the gameplay within a physically modeled environment is pretty hard.

There’s great emergent gameplay inherent in physics systems, the problem is your expectations of everything else becomes escalated, you expect to be able to bonk buster in the head and have him jam his mouth shut… easily done when he’s always standing up straight… what if he’s bouncing all over the place off walls and other busters?

Anyhow this stupid idea has been bouncing around in my head the last couple of days and the inspiration for the digital drawing on the left… Clam jousting!

It’s basically the same as Williams Joust (right), with chicks riding flapping clams in a physically modeled world…it’s a million seller for sure!!!!